Which parts of the Taj are being cleaned in 2019?

The scaffolding went up in 2016 and even a British Royal visit could not stop the drive to restore the marble of the Taj Mahal to it persil whiteness.

What does this mean for travellers?

We are adding to this blog as we receive updates.

Why is it taking so long?

The Taj is being cleaned using a mud pack called “Fullers Earth”.  The clay is applied to the marble to lift the staining left by air pollution and bird droppings before it is washed off with distilled water.  This method is very effective in cleaning marble but it is a slow process. The total time to complete the cleaning has been made even made even slower by the ASI decision to clean the monument in small sections so that the Taj Mahal is not closed. These were the original timelines released by the ASI, they may not be definitive and some work may finish earlier and others longer.

Cleaning work on the front (southern facade) and the south-east minaret is now completed and all the scaffolding has been removed.  Thank you to my friend Jai Sehgal in Agra for sending through this photo. Cleaning on the Peripheral Wall has been completed and scaffolding is being removed. The next stage of work is now scheduled to start at the end of April.

Work to clean the four chhatri’s on the roof of the Taj is now scheduled to start from the first week of April and is expected to take 2 months to complete.

The ASI indicated work would begin the first week of April on the four chhatri’s on the roof of the Taj, but work got underway today (5th May) with the first of the scaffolding going up. A reminder that the work on the main dome will not start until the four chhatri’s have been cleaned.

Update 10th May 2018 – Scaffolding is still being erected, cleaning hasn’t started yet. There is also scaffolding on the Royal Gate at the moment to repair the storm damage to the minarets. 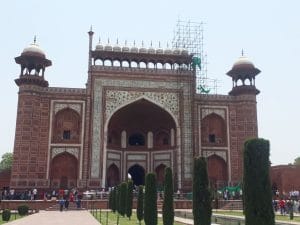 Update 11th June 2018: Scaffolding is erected around one of the small chhatri’s (small dome) on the roof. This will give you a bit of an idea of what scaffolding is likely to look like when they eventually move on to the main dome. 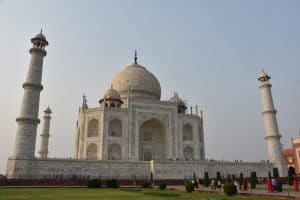 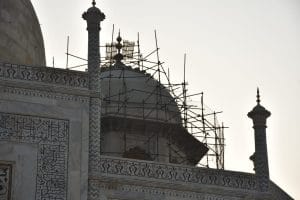 We were advised via one source overnight that the work on cleaning the 4 chhatris (small domes on the roof) should be complete by the end of August and all scaffolding will then be removed in time for the start of the main tourist season.   Currently, pressure is being put on the ASI by the Tourism Industry to delay the start of the work to clean the main dome till April 2019 so that this major work can be completed during the off season.

However, word from our man on the ground in Agra today is that no work is currently going due to the rain.  Both the front small domes and one on the river side are covered by scaffolding.  In his last conversation with the ASI, staff they indicated that they will cover front part (south side) of the main big dome first so that by October they can move towards cleaning the river side (north side).

He has reiterated that the finishing time given by ASI is the end of November 2018, so we have to wait till that time.

Below is the latest photo (taken on a mobile phone with an effect to squash everything into the frame). The scaffolding is starting to be removed from around all the small chhatri’s.  There has been no words as yet as to weather they will move on to the main dome or cleaning will be delayed until the off-season in 2019. In the coming week, cleaning will be complete on all the four small domes (chhatris) and all the scaffolding will be taken down.  The ASI is still advising that deadline to have the main dome cleaned will be the end of November 2018, so we expect scaffolding to start being erected on the main dome soon. Update: 18th September 2018
There is still no official word if the timeline of the end of November 2018 for the cleaning to be finished is going to be shifted or if work will cease and then start again in April 2019.  However, the scaffolding is down off the four chhatri’s on the roof.  This video is from today.  Thank you to our local Agra friend Gary Singh-Julka for the video.

We haven’t had an official update and there seems to be no move to erect any scaffolding yet on the dome. The is no work is going on and no further information is available from the Archaeological Survey of India (ASI) at the moment. Unfortunately, our update is not really an update.  There continues to be no further information forthcoming from the ASI.

We have received the following notification overnight:

We would like to inform you that the civil work on minarets of Taj Mahal had started, as some precious stones fixing work is on and it will take time. Scaffoldings are already there and maintaince work of Taj Museum is already going on.

The mudpack treatment on main dome of Taj is scheduled and it might start as soon as ASI chemical wing gets NOC (No Objection Certificate) from higher authorities and research agency , who is examining main dome weight carrying capacity.

ASI officials are expecting it as soon as possible and hoping to start mud pack treatment on main dome hopefully by Sept 2019. But again, no time line can be announced till the time ASI chemical wing did not receive the NOC from higher authorities.

I have decided to turn of comments on this post as the work has dragged on it really has become a case of ‘crystal ball gazing’ as to when work is going to start on the main dome.   The work on the miranets was not scheduled but urgent work in response to cracking appearing in some stones. We will be visiting the Taj Mahal on our Women’s Only India Tour: Fabric Food & Fabulous +Holi in March 2020. In Agra we will also celebrate Holi – The Festival of Colours >> Read More